Arch. Anouk Legendre, partner at XTU Architects, France, will talk about the nominated project at European Mies van der Rohe Award- “La Cité du Vin” at The International Forum of Architecture and Engineering SHARE Bucharest. The largest event dedicated to architects, engineers and contractors will take place on March 21-22 at JW Marriott Bucharest Grand Hotel and the tickets can be booked here.

X stands for the unknown mathematical variable and TU for the suffix in situ – references to the geography and the landscape of work done by Nicolas Desmazieres and Anouk Legendre, the architects who founded XTU in 2000. Among its many projects, XTU designed the Jeongok Prehistory Museum in South Korea and has worked on the “Maison des Civilisations” in La Reunion, the first positive energy museum in the Indian Ocean.

Standing up for the beliefs that architecture should predict the future and that the biotechnological transition will be the third industrial revolution, the XTU Architects are truly investing in urban agriculture and experimental research, which lies between the life sciences, ecology, architecture and urban development. Moreover, the office XTU is delivering the world first integrated biofacade on a building.

XTU won the Réinventer.Paris competition for Paris Rive Gauche (M5A2) with the ‘In Vivo’ project, a manifesto for the innovative urban integration of nature and living matter with three buildings : the Tree House, the Plant House and the AlgoHouse (integrating a microalgae-producing biofacade for medical research)

Their architectural position is focused on the expression of an architecture carved in the shape of volumetries echoing the urban context and landscape. The form originates from the context, knowningly pictured in a minimalist, refined and futuristic way, inspired by abstract sculptors.

XTU designed the France pavilion at the Expo Milano 2015 and won Architecture + Gold Medal, in the “Pavilions above 2000 m² section”, from the Bureau International des Expositions.

The latest project XTU built is the spectacular Wine Museum in Bordeaux, opened in June 2016.

This building does not resemble any recognisable shape because it is an evocation of the soul of wine between the river and the city.’ – said the architects.

A strong architectural statement, La Cité du Vin stands out with its bold curves and shape. This iconic building with a golden frame that hosts a Cité within the city is a living space with experiences to discover. The aim of the building’s architecture was genuinely to create a link between La Cité du Vin and the spaces surrounding it through perpetual movement.

Anouk Legendre and Nicolas Desmazières, the architects from XTU, designed a space shaped by symbols of identity: gnarled vine stock, wine swirling in a glass, eddies on the Garonne.

XTU Architects created every detail of the architecture in such a way to evoke wine’s soul and liquid nature: ”seamless roundness, intangible and sensual”.

This roundness transcribed in the building’s exterior can also be felt in its indoor spaces, materials and scale. La Cité du Vin dazzles with a golden shimmer reminiscent of the light stone found on Bordeaux facades. Its own facade is made up of silk-screen printed glass panels and perforated, iridescent, lacquered aluminium panels.

Changing with the sunshine or the time of day, the building dialogues with the river through its reflections: there are very close parallels with the wine’s constantly changing appearance. This very distinctive shape causes you to look at the river running past from a different perspective.

The building’s two entrances on either side create an impression of movement and flow between inside and outside. One entrance faces the city and the other faces the river. Higher up, the viewing tower enables visitors to discover the city lights and the surrounding land, like a watchtower.

The wine, the river, the flow of visitors are the main elements that characterized the tour. You pass through the building like a river, with visitors becoming voyagers flowing around the central staircase, perpetuating this impression of movement.

This means that visitors are constantly moving as they experience a virtuous circle of discovery. Each person discovers a new world in a fluid, rotating motion leading to an unusual, limitless destination, like a journey through the meanderings of a cultural landscape which feeds the imagination. The architecture is a voyage in itself, the building programme was developed in line with the scenography.

Downstairs is therefore a dark world, like a cellar, with the roots of the vines. The ground floor is raw as an immersion stage diving into the project, a crossing point. The mirror reflections are disorienting and encourage visitors to move upwards towards the light. They feel this light on the courtyard then follow it through the structure until it finally explodes. There is no fixed route to follow, just worlds to discover.

The aim of the experience is genuinely to question rather than let alone. Sometimes the architecture steps back, in other places it reappears. The wooded arch of the permanent tour, the strongest area of La Cité du Vin, is like a varied sky. The sky is everything in winemaking, determining the harvest. This wooden sky rises, undulates and tightens, and eveything is about movement.

The wooden structure is reminiscent of a timber frame, of boats, of wine on its travels. It is an immersive break from reality, a world of roundness, fluidity and elevation approximating the wine experience. Visitors are in a discovery mind-set initiated by the architecture, which creates the right conditions for them to discover and complete this immersive, initiatory journey. 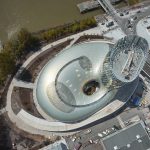 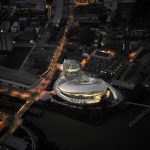 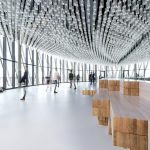 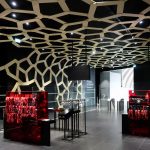 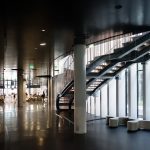 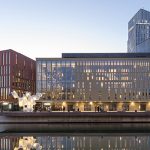 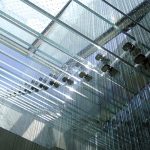 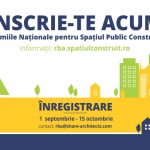 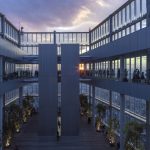